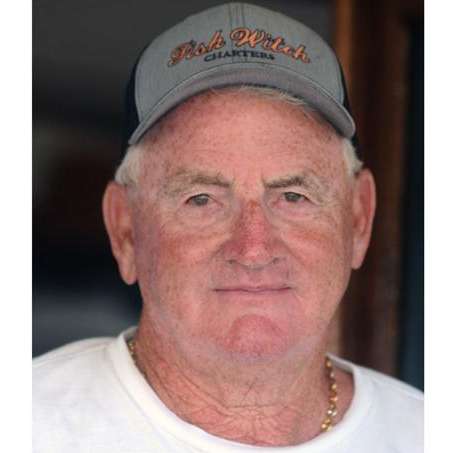 Captain Carl S. Snow, Jr. is a renowned captain along the East Coast. He was inducted into the Wrightsville Beach Waterman’s Hall of Fame in October 2019, an award created to reflect the importance of personal contributions to the culture of water sports throughout the history of New Hanover County. Carl is highly respected by the fishing community and his clients, and he is known for his integrity, hard work, love of children, and professionalism. After spending his childhood both in the North Carolina mountains and in Kure Beach, Carl knew he was a man of the sea. In 1959, on his 18th birthday, he drove straight through the night to Pleasure Island. He began ferrying boats to Bald Head Island while attending UNCW. After serving in the United States Coast Guard, he returned to his home, bought his first charter boat, a twin outboard, and Fish Witch Charters began running trips out of Carolina Beach Marina. Over the last 58 years, Captain Carl Snow is near legend in the fishing community for his hard work, extensive knowledge, and of course, for putting the fish on the dock, but also for his influence on so many other current Captains who have mated or worked with him at some point in their career and are now running boats all over the world. The greatest compliment for Captain Carl are his regular clients that return to fish with him every season.